For the individual traveler, Ruta Verde organizes tailor made round trips through Bolivia. For our “tailor made tours Bolivia” we offer extra logistical services like transfer from the airport, hotel and flight reservations etc. Just tell us what your interests are and how much time you have and we will provide you with a travel schedule that best fits your plans.

Bolivia is such a beautiful country with so much to offer that it will be difficult to choose from its attractions. On this page below you will find some of the attractions of Bolivia which we consider are definitely worth visiting.
Check out our 16 days round trip through Bolivia. Contact us for more information.

La Gran Chiquitania – “The Great Chiquitania” – is South America’s last undiscovered paradise, a vast land of quiet, pristine natural beauty, blessed with a unique culture and fascinating history. Here the beautiful Jesuit Missions are located. They remain in time as an extraordinary legacy because they are the only Jesuit missions in South America which were not destroyed after the Jesuits were expulsed from the Spanish colonies. They are not ruins but villages full of life, with people who still go to mass in the same majestic churches or to enjoy the same baroque music concerts, in the same way they used to do when the Jesuit ruled these missions three centuries ago.

Amboró National Park is an ecological masterpiece of almost half a million hectares. It lies in a unique geographical position at the confluence of 3 distinct ecosystems: the Amazon basin, the northern Chaco and the Andes (nowhere else in the world do three such vast environments converge). Amboró Park contains over 800 bird species, more than the USA and Canada together!

The Noel Kempff Mercado National Park is named after the famous Bolivian biologist and is located 600 Km northeast from Santa Cruz city. It is one of the largest ( 1,523,000 ha ) and most intact parks in the Amazon Basin . This park is so wonderful, has such a unique beauty and is one of the most protected and bio diverse places on earth.

The Madidi National Park characterized by its exceptional wealth of biological riches and variety of ecosystems being home to over 4.739 species of plants, 1.370 species of vertebrates and 867 tropical birds and endemic plants, is considered the most biologically rich protected area on earth and a priority for conservation.

Samaipata (Rest in the heights) is a little picturesque town located in the valleys, 120 km from the city of Santa Cruz . The trip from Santa Cruz to Samaipata will take you through a scenic route where you will enjoy the landscape that gets more beautiful by the minute. Not far away from Samaipata, one of the most important archeological monuments of pre-Columbian time in Bolivia can be found: El Fuerte (The Fortress). This archeological place has been declared Cultural Patrimony of Humanity by UNESCO.

The Bolivian Amazon is an ecological paradise. In this paradise -on the river Mamoré- cruise ship Reina de Enin, takes you on a tour in the Bolivian Amazon. It´s a beautiful trip where you will be surrounded by sweet or fresh water dolphins, capibara´s (world’s largest rodent), toucans, macaws, piranhas etc. You can comfortably read a book from your hammock while you are consuming a cold drink in the Bolivian Amazon.

The Bolivian part of the marsh (El Pantanal) is world famous and a classic place for eco tourism because it is the best preserved, and maintains the most genuine, virgin and wild places of the whole Pantanal region (Bolivia, Paraguay and Brasil). In this paradise you can enjoy many activities like horse-riding, ecological walks, boat excursions and close encounters with the numerous animals forming one of the densest wildlife populations of the continent: caimans, capybaras, iguanas, monkeys, jaguars, parrots, blue macaws, toucans, etc.

The consciousness of Ernesto “Che” Guevara, born in 1928 in a middle class family in Argentina , was awakened at an early age. Che decided that personal sacrifice and violent revolution was the only way to create an equal society. Rejecting his comfortable life, he set off to travel around Latin America. In Mexico, Che met Fidel Castro. With a small army they overthrew the administration of president Batista in Cuba. Che Guevara got Cuban citizenship and after having worked as a doctor, military commander, president of the National Bank and Minister, he set up his base in Ñancahuazu, 250 km southwest of Santa Cruz , Bolivia.

Sucre is one of the most beautiful cities of Bolivia and is also known as ‘La ciudad blanca’, the white city. The town is situated at 2.790 m. and has a lovely climate. Sucre is a beautiful colonial town with 209.000 inhabitants but it looks more like a small lovely village with white painted houses en cozy squares. Sucre is the official capital of Bolivia. The whole centre of Sucre is declared Cultural Patrimony of Humanity by UNESCO.

Potosí -situated at 4.200 m – used to be one of the richest cities in the world -comparabale with Londen and Paris- because of the silver mines.

According to old tax records, Potosí was the epicentre of silver mining between 1545 and 1810, with nearly half of the world’s silver originating from Cerro Rico in the first one hundred years of it being extracted there. The Spanish believed that there was so much silver to be found at Potosí that they could build a silver bridge from there to Spain. Miguel de Cervantes also immortalised the city in one of his most notable works, “Don Quixote de la Mancha”, coining the expression ‘Vale un Potosí’, meaning that something is worth a fortune.

During the colonial time Potosi was the biggest city on the continent and nowhere else was the contrast between rich and poor so big as in Potosi. Even nowadays people still work in the mines under terrible conditions. Besides visiting the mines ´La Casa de la Moneda´ is also worth visiting.

‘I am Rich Potosí, treasury of the world, king of the mountains and envy of Kings.’ – Motto from Potosí’s coat of arms, granted by Emperor Charles V

The salt lake of Uyuni is one of the most beautiful areas one can visit in South America. An enormous big salt lake, lagoons in all beautiful kind of colors, geysers and an island with meters high cactus will leave an impression that will last forever. The surface of the salt lake is 10.000 km2 and the salt lake is situated at 3.670m and once was part of a prehistoric salt lake that contained most of the area of South west Bolivia.

Tiahuanacu is one of the most important archeological places in Bolivia. Tiahuanacu is situated nearby La Paz. Nobody exactly know when the Tiahuanacu-culture started. Archeologists think Tiahuanacu was founded around 1580 B.C. and reached its peak around 700 A.C. Tiahuanacu has been declared Cultural Patrimony of Humanity by UNESCO. 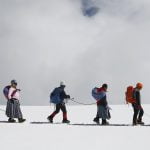