The Blue-throated Macaw (Ara Glaucogularis) can only be found in one place on earth: the Beni Savanna of Bolivia. Unfortunately, due to habitat loss by human intervention the species has been declining to near extinction. Only 450 of these beautiful birds are still flying free in the wild. The Blue-throated Macaw Lodge is the world’s only protected area for the Blue-throated Macaw. The lodge was created in 2008 to protect the macaws habitat through an artificial nest boxes program and the involvement of local communities.

“Paraba Barba Azul” is what the locals call the Blue-throated macaw in Bolivia, a name that means “Blue Beard” in Spanish, referring to the bird’s distinctive blue patch beneath its bill.

The Paraba Barba Azul Reserve not only provides refuge to Blue-Throated macaws but also to other 317 bird species (with the record of 179 birds seen in a single day in September) and more than 27 mammal species including giant anteater, pampas cat, puma, jaguar, ocelot, marsh deer, pampas deer, collared peccary, maned wolf, black howler monkey and capybara.

The Blue-throated Macaw Lodge is located in the heart of the Beni Department in Bolivia, it covers 27,180 acres (46 km2) of tall grasslands, extensive wetlands, and islands of forest and palms—an incredible wildlife haven, a truly wildlife lover’s paradise and a playground for nature photographers.

Visiting the Barba Azul Nature Reserve requires a minimun stay of 3 nights. Visitors that are keen on photography are advised to stay 4 nights to fully enjoy and explore the wide variety of wildlife at Barba Azul.

Barba Azul is home to 319 confirmed bird species of which many can easily be spotted and photographed. Early morning birding is advised as forest, savanna and cerrado birds are mainly active in the morning. Water and marsh birds can be observed throughout the day.

Boat trips:
Water and marsh wildlife is best observed from the water. Barba Azul Nature Reserve has a 5-person boat with a silent outboard motor to enjoy the amazing wildlife from the water.

Horseback riding:
The extensive savanna and cerrado habitat can also be explored on horseback. Five beautiful and tame horses will ensure an amazing Beni outdoor experience.

Walking Trails:
The local Barba Azul rangers (Spanish speaking only) will assist you to reach the most beautiful locations of the reserve to ensure the full wildlife experience that Barba Azul has to offer. Professional English-speaking bird guides have to be arranged separately and can be included in the package.

Rustic Cabins:
Barba Azul has 4 rustic cabins with twin-beds (two beds) and a private bathroom overlooking the stunning Omi river with a high abundance of marsh and water birds. Enjoy the natural wake-up call from Black Howler Monkeys in the morning.

Barba Azul has a total capacity of 16 visitors: 8 people divided over 4 cabins, and 8 people in the Barba Azul Biological Station.

Dining Facility:
Breakfast, lunch and dinner is served in the dining facility at any hour of preference. In coordination with the field house manager early morning
breakfast can be arranged.
Hammocks are available to relax after a long day of hiking and wildlife watching.

The wet season is from November until May (flooding can continue until July). During this period the savanna habitat will be flooded and you can expect rain at least once every two days. This is also part of the southern summer and day temperatures can reach 35 degrees Celsius (95 Fahrenheit). The dry season is from May until November with average day temperatures 28-30 Celsius (82-86 Fahrenheit), but during this period 2-3 day cold fronts can reach the reserve unpredictably, bringing the temperature down to 12-18 Celsius.

What we recommend to take with you:

Would you like to help to protect this special place? Engage yourself to this effort to save this fantastic Bolivian endemic macaw. Come and visit the Blue-Throated Macaw Lodge. This tour can be also combined with a tour to the Red Fronted Macaw Lodge, a river boat trip to spot fresh water dolphins in the Bolivian Amazon or any other of our tours in Bolivia. Please contact us for more information or for making a reservation.

The Paraba Barba Azul lodge is a truly wildlife lover’s paradise and a playground for nature photographers! 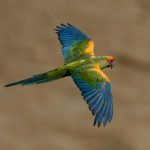